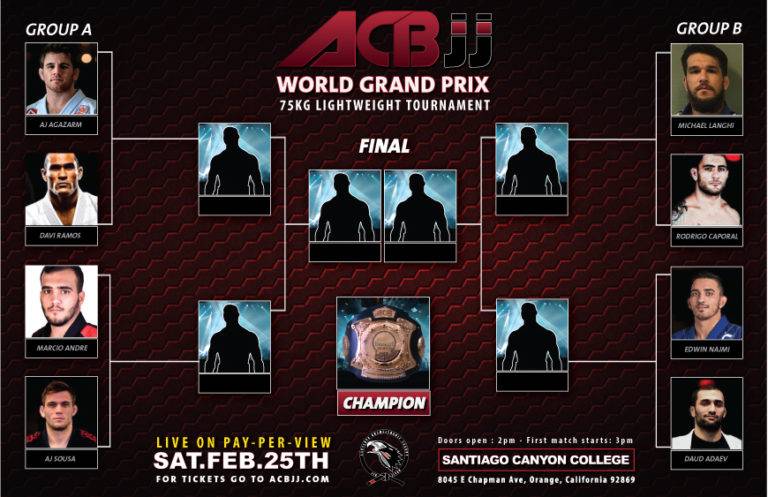 Absolute Championship Berkut Jiu-Jitsu (ACBJJ)
As a part of its ongoing expansion, the highly recognized Eastern European fighting promotion, Fight Club Berkut, has expanded its reach to include nearly a dozen Gi and No-Gi grappling events this year in six different weight divisions.

However, once again, held in Moscow, Russia, the 2016 3rd Berkut Jiu-Jitsu Invitational continued to impress, featuring a submission-only event and world class grapplers in another amazing display of the gentle-art. The event included an elite group of talent, including Yuri Simões, Lucas Leite, Erberth Santos, Clark Gracie, Michael Langhi, and Jackson Sousa. With these and other events scheduled for 2017, ACBJJ is creating a name for itself, as one of the fastest growing and most respected organizations to watch in Jiu-Jitsu competition around the world.
ACBJJ GRAND PRIX / SANTIAGO CANYON COLLEGE – ORANGE, CA.
Once more ACBJJ is raising the bar as we prepare for our 1st ACBJJ Grand Prix event in the United States, the upcoming ACBJJ GP, scheduled for Saturday and Sunday, February 25th and 26th. Our venue for this card will be the campus of Santiago Canyon College, in beautiful Orange, California. This event promises to be one more spectacular display of talent, featuring some of the most prestigious and up and coming Jiu-Jitsu players from around the world. Including names like, Michael Langhi, Davi Ramos, Rodrigo Caporal, AJ Sousa, and Márcio André, not to mention, a very likely battle between two teammates, the Americans, Edwin Najmi and AJ Agazarm, both from Gracie Barra.

Beginning on Saturday, the 75kg (165.3 lbs) and 85kg (187.3 lbs) categories promise to showcase some of the top Jiu-Jitsu talent from across the globe. In addition to some of the best up and comers, we can look forward to seeing World Champion, Pan American, and European Open Champion, the American black-belt under Romulo Barral of the Gracie Barra Academy, Edwin Najmi display his submission oriented style on the mats.